Inside of every system there is a central body that manages the interaction between processes and external resources. This is the kernel.

How does the computer know whether your code can access these resources as for example mov register, cr3?

The access model of a kernel is split into rings:

The CPU tracks the current privilege level that controls the access to resources.

When the kernel boots up at Ring 0, it sets MSR_LSTAR to point to the syscall handler routine. When it wants to interact with the kernel it can call syscall. In this case happens next:

You can find the core sudo code of syscall here.
When the Kernel is ready to return to userpace, it calls the appropriate return instruction. In such case the privilege level will switch to Ring 3 and control flow will jump to rcx.

First of all get yourself the qemu emulator which will emulate your kernel from here https://github.com/pwncollege/pwnkernel. The build might fail for few reasons and if it happened to you, see the logs with dmesg. In my case it was quite straightforward, as I saw that the crash was caused by insufficient memory. I had my virtual memory at 3GB, however building the emulator requires at least 4. So, increasing your RAM to 4GB should eliminate one of the reasons why the kernel would fail to compile.
Let's also have an example ready. I will go with this example that I mentioned in Shellcoding.

Launch the kernel and then debug the running emulator with gdb linux5.4/vmlinux. This will throw us in the kernel space. 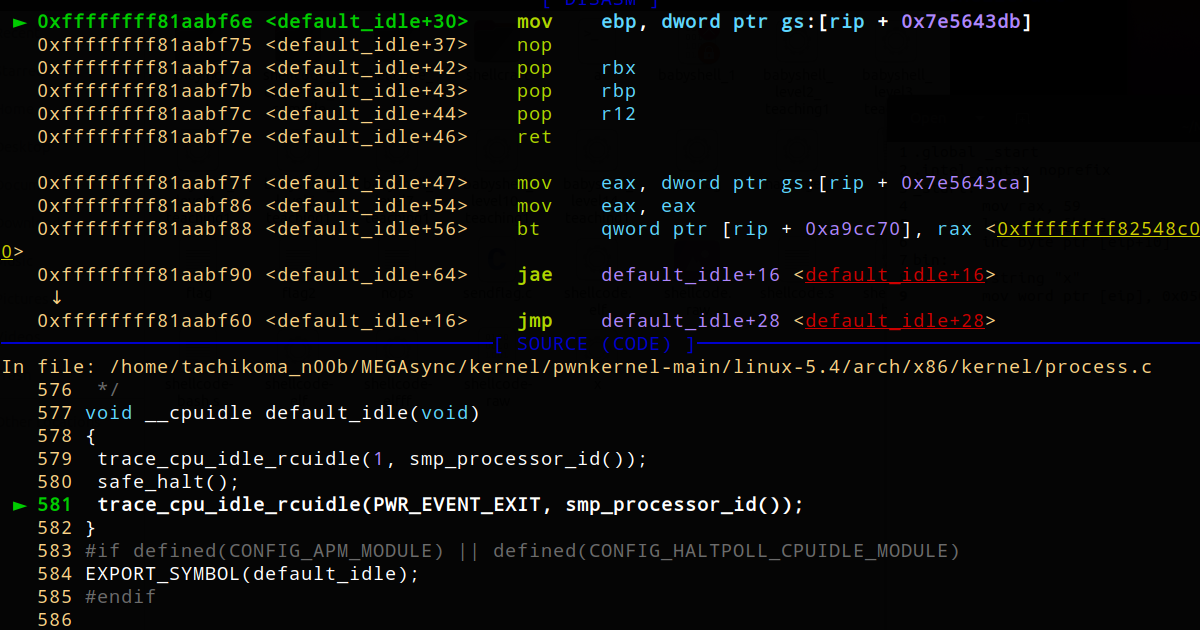 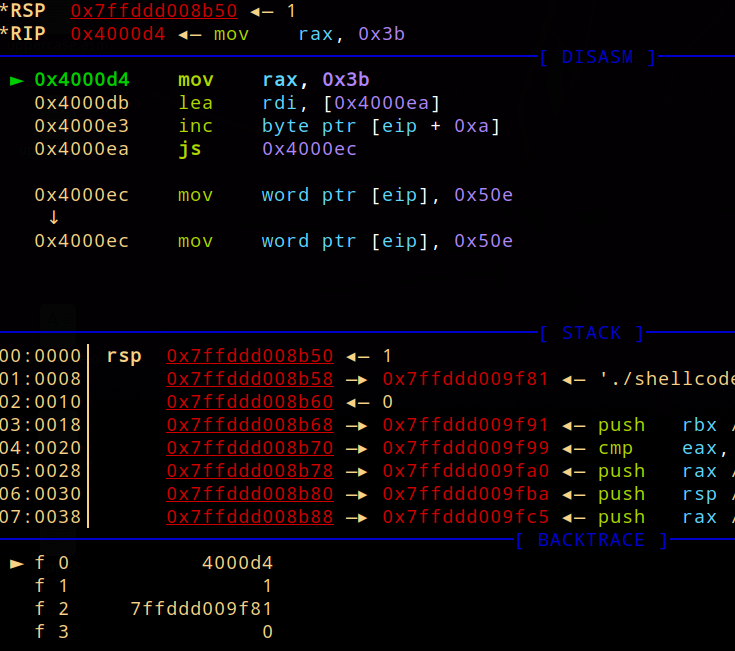 We are outside of the emulator with gdb remotely attached to it, debugging a process inside it from the kernel space. With this certain shellcode it took me a while to si till I got there (ni could be possibly malfunctioning in this case), because we can see how the kernel acts to different instruction until hits the syscall entry point! 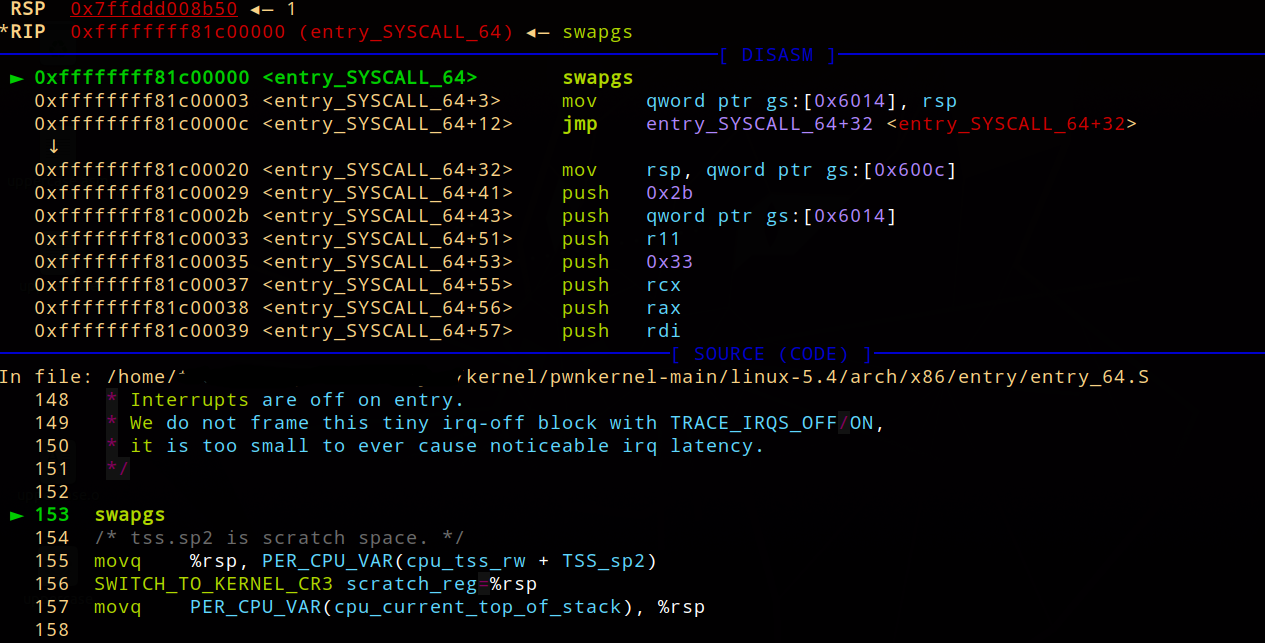 We are inside the syscall instruction! From there you will see many interesting things, for example upon the entry the return address is saved in rcx, which as how the kernel handles syscall when it switches between rings. This way you can debug anything and trace up to how the kernel acts without worrying about unintentionally destroying your system. Remember, you would want to be more specific about what you want to debug, so breaking at the exact addresses as was done above is a good way to apply this. Read more on debugging and kernel environment in the posts below.

Kernel modules are libraries that are loaded into the kernel. They are similar to libraries in userspace as libc. They have .ko extension and will be loaded and have the same privileges as the kernel. Kernel modules interact and implement different hardware and networking functionality.

Historically, kernel modules could add system call entries through a bit of effort by modifying the kernel's system call table. This is explicitly unsupported in modern kernels. Nowadays, it is usually used by rootkits to overwrite such functions to hide malicious activity from users.

Theoretically, a module could register an interrupt handler by using the LIDT and LGDT instructions and be triggered by, say, an int 42 instruction.
Useful one-byte interrupt instructions to hook:

Just with these two bytes, it is possible to create a check in how the kernel executes the functions and make sure that the control flow won't get hijacked.

A module can also hook the Invalid Opcode Exception Interrupt! It can be used to implement custom instructions in software for example for security retrofitting. However it is usually a bespoke interaction method.

The most common way of interacting with modules is via file!

A module can register a file in one of the above locations. Userspace code can open() that file to interact with the module!

One interaction mode is to handler read() and write() for your module's exposed file.
From kernel space:

Useful for modules that deal with streams (i.e., a stream of audio or video data). If for example there is a module of a specific hardware device, this is how someone would read() and write() to interact with it.

ioctl() which stands for Input/Output Control is a syscall that provides a much more flexible interface. From kernel space:

The kernel can do anything, and kernel modules in a monolithic kernel are the kernel. Typically, the kernel:

In the emulator mentioned above you can find few kernel modules:

Kernel modules can be loaded using the init_module system call, usually done through the insmod utility. A kernel would be loaded with insmod mymodule.ko. List them with lsmod and remove with rmmod mymodule.ko.
Bonus! cat will run forever in the emulator, so to read just once, you can use the dd utility and output the content to file descriptor 1:

There are various attack vectors from which the kernel can exploited such as:

Usually this is done to crash the system, escalate priviliges, rootkits, gain access on other parts of the system and so on.

This is how the kernel handles interactions between the kernel and userspace. The functions above are similar to memcpy() and should be handled.

Kernel memory must be kept uncorrupted! Corruption can:

All user data should be only accessed with copy_to_user and copy_from_user.

Kernel modules are not userspace programs.

As seen, it has a lot of information that defines different priorities, specific behaviors, alignments etc. and the credentials of the process which are stored in the cred struct:

The credentials are supposed to be immutable (i.e., they can be cached elsewhere, and shouldn't be updated in place). Instead, they can be replaced:

The cred struct seems a bit complex, but the kernel can make us a fresh one!

Luckily, if we pass NULL to the reference struct, it'll give us a cred struct with root access and full privileges! This can be achieved with:

Let's check it in action in our emulator. In the source file of the emulator in src/make_root.c you will find the file we will work with: 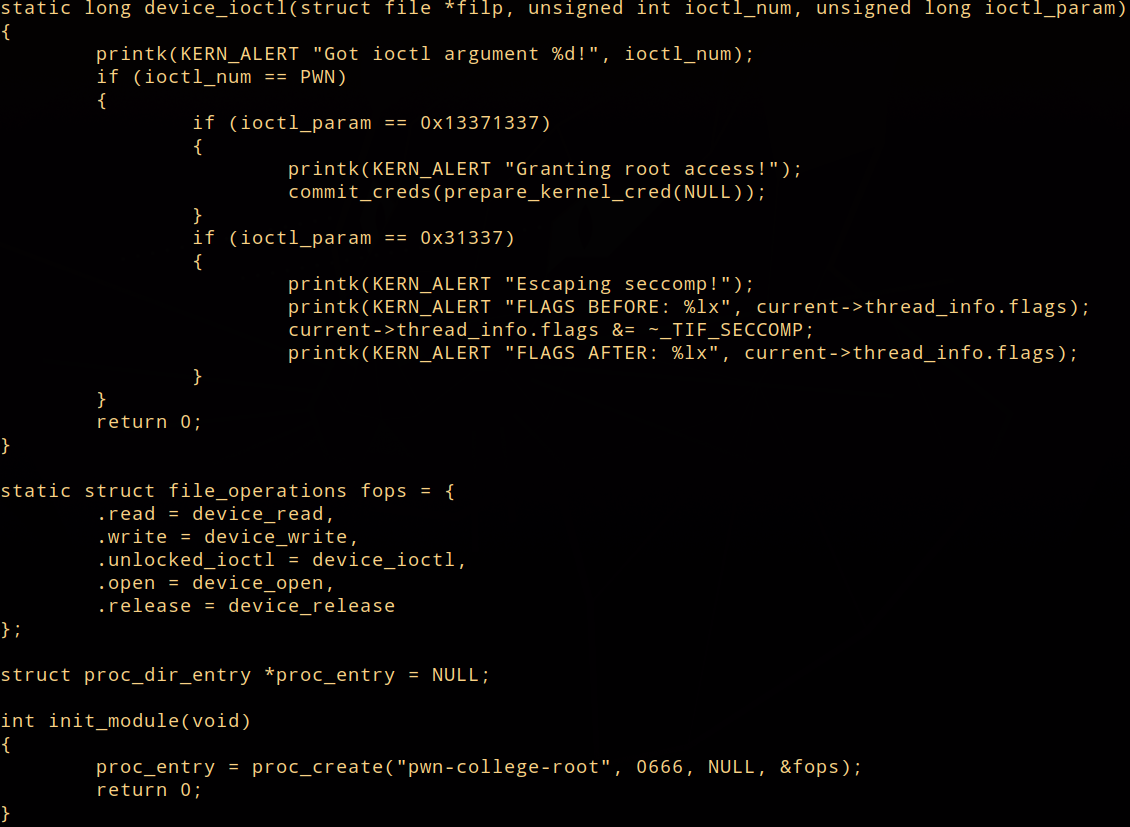 The code above creates a device "pwn-college-root" in /proc, then registers some operations for it and then the ioctl() handler. It means that if the octal number of PWN and a parameter of 0x13371337 is used it will grant us root access. Crazy right? To exploit this, we need to create a program that opens "pwn-college-root" and triggers the correct ioctl_num and ioctl_param which will make the process to become root! We don't know the parameter of PWN, so we need to reverse engineer this from the module. Upon objdumping the src/make_root.ko file, we see: 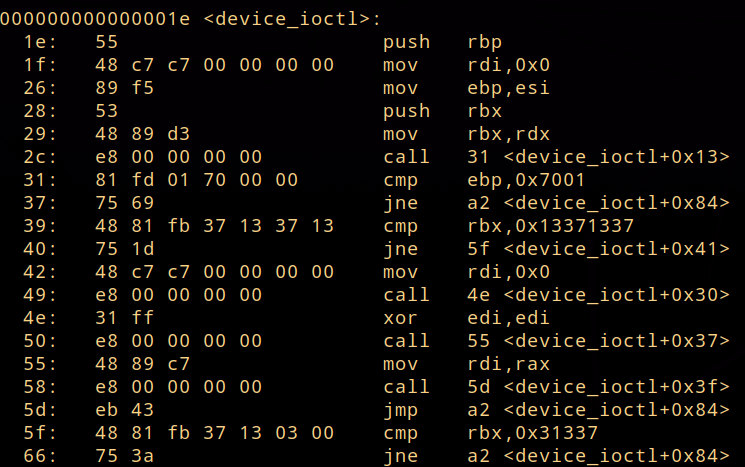 We can see in the device_ioctl function how ebp is compared against 0x7001. epb comes from esi, which is the second argument. We have our argument for PWN. First create a new file locally with vi attack.c and write the exploit.

compile statically because there are no libraries inside the emulator:

Then launch the emulator, load the kernel with insmod make_root.ko, switch to ctf user with su - ctf, launch the "attack" file and observe privilege escalation against the kernel in action. After that we can even launch /bin/sh from inside the C program and it won't drop the privileges since commit_creds(prepare_kernel_cred(0)); will 0 out everything which will be set to *ID of 0

How do we know where commit_creds and prepare_kernel_cred are in memory?
Older kernels (or newer kernels when the kernel ASLR - kASLR is disabled) are mapped at predictable locations. Do you remember the old IOT joke? It is likely that in most embedded devices the kASLR will also be disabled. We can also use /proc/kallsym which is an interface for the kernel to give root these addresses. If you are root, it is possible to find the address of commit_cred with cat /proc/kallsyms | grep commit_cred. Debugging as we did above is an available option as well. Otherwise, it's the exact same problem as userspace ASLR! (see Memory Errors)