The Dynamic Memory Allocator also termed as the Heap, is the region in a program's memory which is dynamically allocated and freed upon use. (also see Memory Segments).

Note: This information is constantly changing (see: tcache) and PTMALLOC IS VERY COMPLEX. This is an approximation. The information below refers to the ptmalloc cache design in libc 2.31.

This post describes specifically ptmalloc, the allocator in libc on Linux. Other allocators work differently where jemalloc for example has no inline metadata. The information below is enough for understanding how they can be implemented and misused.

mmap (mmap(0, num_pages*0x1000, ...) creates pages of memory on demand and interacts with them. It allows dynamic allocation/deallocation of how the program needs and that memory survives across functions. However, there are few issues. The allocation has to be a multiple of 4096 bytes which is the size of a page. It is also very slow requiring kernel involvement.

Imagine a library that has mmap()ed lots of memory and hands out small chunks of it on demand, similar to:

To handle the memory allocation there already is a special function that works and does similar stuff mentioned in the code above.

The heap, as implemented by ptmalloc/glibc (and analogues), provides:

And some auxiliary functions:

These functions are used, extensively, by practically every single non-trivial piece of software. ptmalloc actually does not use mmap.

Under the hood, this is managed just like mmap(). ptmalloc slices off bits of the data segment for small allocations, and uses mmap() for large allocations.

What can go wrong?

Bugs caused by #1 become security issues due to #2 if not caught!

How to detect issues?

Valgrind can detect heap misuse, if your testcases can trigger it. glibc itself has some hardening techniques:

There are various "more secure" allocators being developed (but not really deployed) Like many other issues, no general techniques exist for detecting dynamic allocation errors.

To see more why the heap can have leaks, let's check the lifecycle of allocator security:

So, there is more than one way to misuse the heap!

If you malloc something and then you forget to free it before losing references to it, as in the example above, it will remain there until the process dies. The memory pointed by blah is never freed and will just remain there in the data segment. This could lead to more issues, including data leaks and heap exhaustion.

In the code below, after some thousands of allocations, it will return nil.

This might not always be an issue, but when the return value of malloc is not checked, this can lead to such issues as memory access at 0 or kernel corruption.

In the example, if we call free on a pointer on line 7 and then use it on line 13, this could lead to more issues. The memory that gets freed at first, stays valid and might be reused. When we are allocate a variable that tells us if we are authenticated or not in line 10 and 11, and then writing with scanf() on line 13, the variable will be overwritten with user input.

tcache stands for "Thread Local Caching" in ptmalloc, to speed up repeated (small) allocations in a single thread. It is quite a recent feature as of the time this post was written, introduced in glibc 2.26 in 2017. It is implemented as a singly-linked list, with each thread having a list header for different-sized allocations.

In each thread there is one instance of tcache_perthread_struct and the struct contains an array of tcache entry pointers, each pointing to a beginning of a list, of tcache entries - allocations. These allocations are called bins, where different sized allocations go into different lists. tcache is: 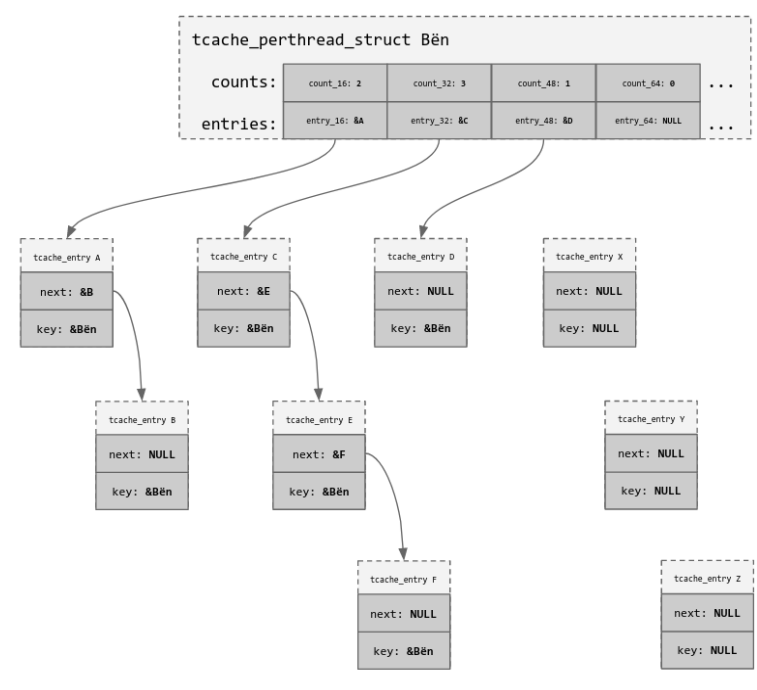 We can see a single-linked list, where there is just one forward pointer per entry. In a double-linked list, for example, b will point back to a. Read more in detail how this struct works here.

Each tcache_entry is actually the exact allocation that was freed! On free(), the following happens:

On allocation, the following happens:

Things that are not done:

How do malloc() and free() work in a Linked List

when malloc requests a size of 16 bytes in memory (malloc(16)) it tracks the pointer between the previous size and what to return:

the linked list tracks the size of the allocated memory and this is also how free() knows what should be freed. In a linked list the first malloc however doesn't have a previous size to track, so it will get that memory differently. Imagine a tcache operation with a size 16:

the first 8 bytes will be what malloc requested and the next 8 will be the key it tracks. When free() is called it goes back to the previous 8 bytes and they will be ready for the next malloc:

The following way tcache tracks the linked list operations, by maintaining the recursive path of pointers where the requested size is referenced for the next operation. In glibc 2.27 used in Ubuntu 18.04 for example, another free would produce:

This is an issue, because now all the future mallocs will return bbbbbbbbb. This was handled in the more actual versions of glibc and if someone will try such operation, the program will throw an exception that is triggered by the referenced above keykeyky key. When this is allowed, a double free is produced.

Above we saw how a double free can occur. Let's check how it can still occur:

By corrupting the available space after a free(), it is possible to trigger a double free without the exception. The next 2 pointers will point to the same address:

What happens if we corrupt tcache_entry->next?

We create a stack buffer, free it and then corrupt the next pointer of the freed entry that used to point to b (the last thing that was freed). With the first malloc(x), it will return a and with the second, we will get what a was pointing to next, which is our stack buffer:

We see our stack buffer, because we corrupted the next pointer to which a was pointing. This way, we can return anywhere we want, as long it is a valid memory where malloc() can return.

As we saw with tcache, the ptmalloc uses a bunch of metadata to track its operation. It keeps them in:

When an allocation is freed, that area (the pointer that is returned by malloc) is reused for tcache metadata to create a tcache single used list. This is called per-chunk metadata.

malloc(n) guarantees at least n usable space, but chunks sizes are multiples of 0x10 (multiple of 16).

We allocate a and b and then a is freed. Afterwards there is the output of previous chunk and the size. In C, when a number is added to a pointer, it will shift that pointer by that number times size of that pointer. By subtracting *(a-2) for instance, can be seen where the pointer is pointing 2 times 8 bytes (the size of pointer) behind. In this way the chunk addresses of unsigned long mchunk_prev_size (a) and unsigned long mchunk_size (b) can be seen.

The output will yield:

In ptmalloc the prev_size is checked only when a is free. When a is allocated, it can use the previous size field of b as storage. As an optimization measure, it saves 8 bytes of RAM per allocation when the such cases occur. Let's check an example:

16 bytes is the usable space in a chunk. If we allocate more, 24 for example, we will see upon running the program heap_overlap 24:

The previous size of b is filled with A's. The metadata of next chunk overlaps with the current one if it is in use. This is the intended use in ptmalloc to save some space and from a security perspective, this is insane.

As we saw with tcache, a free()d chunk has additional metadata about the location of other chunks:

When free()d, large are:

In the struct we can see the forward (*fd) and backwards (*bk) pointers pointing to corresponding chunks:

The heap is a finite-sized allocation that needs to be manually expanded. During allocation, malloc() will (simplified view):

We allocate 16 bytes printing a[3] which is the size metadata of the next chunk. Let's recap:

After that we keep allocating memory to a. Let's examine the wilderness in the output:

We can see how the wilderness keeps decreasing by 20 bytes and with the giant allocation at the end it gets very tiny. In the older versions of libc (before 2.31), the wilderness goes to 0, however in newer ones, libc regrows it by 0x1000.

What might we want to achieve with heap metadata corruption?

Recall the largebin Chunks mentioned above. When a chunk (bigger than the tcache size) is allocated, it is removed from the doubly-linked list. This looks like:

Extra checks have been introduced in libc 2.31. (chunk->fd->bk == chunk && chunk->bk->fd == chunk) have heavily weakened this attack, (though you can still pass this check if you inject a chunk!).

What if all we have is a single 0-byte write? This is common, with off-by-one string operations!

In the program above, the extra allocated 8 bytes, will be the previous size of the next chunk. In this example we have a one byte overflow which overflows the size of the previous chunk. Imagine 3 allocations beside each other where the one in the middle is freed. After overflowing it in the middle with a 0 ending byte, it will get truncated to 0x1000 from 0x1008. However, C will count the size as 0x1008. In this case, the previous size won't be properly updated anymore. Upon freeing the chunk on the right, the overflowed chunk in the middle will be consolided with the one in the front. This will lead to further allocation over the overflowed chunk in the middle and it will get overlapped. This vulnerability was however patched in the past, but bypasses do exist as well. Read more in detail on this attack here https://heap-exploitation.dhavalkapil.com/attacks/shrinking_free_chunks

This is another patched but interesting attack, where the size of the wilderness gets corrupted. Here the wilderness gets overwritten with a gigantic negative number and confuse the heap in such way that the next allocation would be the previous one. Another fun thing, you can allocate a lot of memory in front and have that memory extra onto the stack in front. See https://github.com/shellphish/how2heap/blob/master/glibc_2.27/house_of_force.c

This is one of the first House exploits that appeared and since over 15 years it is still actual! It exploits the fact that there are very few checks done at free() time. This is how it works:

With a pointer overwrite, can be used to later malloc() a stack pointer. Can be done with or without tcache. Let's check an example:

In the output we can see, that after poisoning the previous allocation, a stack address is returned:

How do you trigger a malloc() in an uncooperative program? In fact printf(), scanf(), and friends will use malloc() to allocate space during operation. With the right setup, can lead straight to an overwrite. For example, initiating the House of Spirit and then calling printf() can lead to a straight buffer overflow. If you want to disable this in your own programs (for example when using printf() for debugging), disable libc's internal buffers with:

Special and Amazing Thanks to Professor Zardus for this Awesome Module!